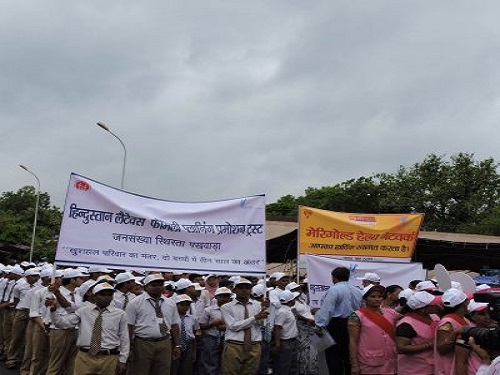 We Go the Extra Mile

In its zeal to build prosperous communities and make a real progress in reproductive & child healthcare, HLFPPT is going beyond the realms of programme implementations. During the World Population Day, HLFPPT Teams across different states organised special events to spread awareness about family planning

World Population Day is an annual event that is observed on 11th July every year across the world. It is celebrated to increase awareness among people towards population issues. It was first started in the year 1989 by the United Nations Development Programme and has been celebrated since then. Theme for 2015 was Vulnerable Populations in Emergencies.

The Government of Uttar Pradesh held a grand World Population Day (WPD) celebration on 11th July 2015 at the Chief Minister’s residence in Lucknow. The theme for this year was khushhal pariwar ka mantar do baccho mein teen saal ka antar for which more emphasis was placed on spacing method.

HLFPPT was among the leading partners for organising the event in UP. It launched Hausla Sajhedaari Van in the rally and also distributed Caps, T-shirts & Umbrellas with HLFPPT logo and message of Population Day among participants & guests. Moreover, it distributed IEC materials and condoms through its stall.

Rally on Stabilised Population in Chhattisgarh

HLFPPT has been operating Mobile Medical Unit (MMU) in Dantewada district of Chhattisgarh as a part of CSR initiative by Essar. In order to spread awareness regarding Population Control & Family Planning among community members of Kadampal Village, Dantewada, MMU team members organised an Awareness Rally on WPD with support of village sarpanch, Essar officials and school teachers. A team of 10 school teachers and 120 school children participated in the rally, which was conducted across major areas of Kadampal and ended at a primary school in Gayatapara village. Key messages on population control were announced during the rally. This was followed by a Drawing Competition on the theme of population stabilisation among students of Middle School at Gaytapara. These apart, Health Check-ups, Counselling Sessions and Free Medicine Distribution were also done.

As a CSR partner for Suzlon, HLFPPT is implementing MMU project at selected 57 villages of Jaisalmer district in Rajasthan. To mark World Population Day this year, the MMU team organised a couple of activities involving students and community members at Government Higher Secondary School at Mulana village in Jaisalmer. The activities included: a Rally, where 130 school students and villagers participated, and a Painting and Essay Competition on the topic Effects of Increasing Population, with around 40 participants. Moreover, community meetings were organised with adult men and women of the village, briefing them on basket of choice on family planning, especially regarding spacing methods.

HLFPPTs MMU team in West Bengal organised a Walkathon at Jambon Village, Bidbehar Gram Panchayat in Burdwan district. The walkathon witnessed enthusiastic participation of community members and conveyed key messages on family planning, such as Avoid early marriage, Adopt small family norms, Plan proper spacing between two children, Save the girl child; etc. Community meeting was also held, in which the village ANM, Kalyani Kar, encouraged community members to promote womens health. She took sessions on reproductive and sexual health issues, and on methods of family planning. This was followed by a health quiz among community members. Other stakeholders, including ASHA and AWW were also present and played a key role in mobilising the community.

WPD celebrations also witnessed convergence with the government. In West Bengal, HLFPPT and NRHM conducted a Condom Distribution Campaign in a canopy at Malandighi PHC under Kanska block. ASHAs actively took part in organising this program, through which HLFPPT reached out to more than 240 beneficiaries.

Yuvaaon ne ye thhana hai, jansankhya nahi badhana hai”, parivar niyojan ke hain anek upaaye, chune wahi jo mann ko bhaay” these were some of the inspiring slogans that came out from the masses at a Slogan Competition organised by HLFPPT at IEC Mela in Lucknow Medical College. The Mela was orgainsed by SIFPSA in association with the Govt of UP, where HLFPPT also held a stall. Approximately 200 people participated in the competition, out of which best five slogans were declared winners. Besides, the stall also displayed HLFPPT activities through posters & banners.

To sensitise students about stabilised population, HLFPPT organised an essay competition at four inter colleges in Lucknow, which drew 166 participants. Winners were felicitated by Ahmad Hasan, Health Minister, Government of UP, at the IEC Mela. Topic of the competition was how stabilised population is an indispensable aspect for overall socio-economic and technological development of India. Through their essays, students delved on the various problems being faced in India such as unemployment, illiteracy, migration, pollution, hunger, etc and how they are all an outcome of uncontrolled population.