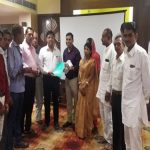 In order to advocate the concern of PLHIV and as a part of advocacy initiative, HLFPPT and RSACS jointly organized, a State Level advocacy Meeting under the chairmanship of Dr. Rajendra Prasad Doriya, Project Director, RSACS. The SACS oofficials were also present in the meeting. The representatives of various interline departments were invited for their sensitization so that they could encompass their support to the People Living With HIV/AIDS (PLHIV) and the PLHIV can avail all the benefits by creating an enabling environment. During the meeting, issues like- Concessional/ Free Bus Pass by issuing a smart card to all PLHIV by Rajasthan State Road Transport Corporation (RSRTC), Inclusion of PLHIV in Food Supply Scheme and Scope of PLHIV related activities in CSR Rajasthan, were discussed.