Home Our Blog Updates HLFPPT participated in the National Workshop on ICPD@25- Leveraging Partnership organised by Ministry of Health and Family Welfare, GoI 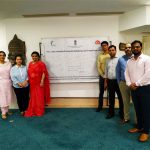 HLFPPT participated in the National Workshop on ICPD@25- Leveraging Partnership organised by Ministry of Health and Family Welfare, GoI

Recently on 11th July 2019, whole world observed the World Population Day revalidating what was discussed during the ICPD in 1994 at Cairo, Egypt. The conference was coordinated by the United Nations for an International Conference on Population and Development in Cairo, Egypt, on 13 September 1994. Its resulting Programme of Action is the steering document for the United Nations Population Fund. At the ICPD in Cairo, 179 countries adopted a forward-looking, 20-year Programme of Action (extended in 2010) that continues to serve as a comprehensive guide to people-centred development progress.

The World Population Day 2019 marks 25 years since the landmark International Conference on Population & Development (ICPD), held at Cairo in 1994. This event marked a paradigm shift from earlier policies to one that places the individual at the centre, and respects choice, rights and empowerment. The 25th anniversary of the ICPD is an opportune moment for the global community to reflect on the progress made in advancing the agenda of Sexual and Reproductive Health and Rights and address the remaining challenges.

Extending the above agenda, HLFPPT participated in the National Workshop on ICPD@25- Leveraging Partnership organised by Ministry of Health and Family Welfare, Government of India at Vigyan Bhawan, New Delhi, where Hon’ble Union Minister of Health and Family Welfare Dr Harsh Vardhan has appealed to all the NGOs in the country to dedicate a month every year for helping the cause of Family Planning and Population Control. The workshop was attended by most of the country heads of different organisation that are committed to standing side by side with the Government of India.

Out of 17 Sustainable Development Goals (SDGs), HLFPPT through its presence at grass root level in 25 States and 3 UTs are working extensively to help the SDG Goal No-3 which is- Good Health and Well-Being. HLFPPT core area of work is Reproductive Health, Maternal & Child Health, Adolescent Health, Family Planning, HIV/Aids, Elderly Care and Support with a focus on the poor and marginalised rural and urban population.

The scenario of India’s Demography is also changing. With India’s present population at around 1.3 billion, the Population Momentum is projected to go high at 1.7 billion, after which the momentum is expected to decline. The annual Population growth rate has also witnessed the steepest decline at 4 % during 2001-2011, which specifies the choice of Family is shifted from Joint to Nuclear. At present, India is entering the final stage of demographic transition and nearing the replacement level of fertility in light of the rapid changing of the demographic scenario.

At present, with over 60 active projects, HLFPPT is leading the market of Healthcare service delivery with a strong foothold in the field of Health. HLFPPT is managing and operationalizing over 174 Mobile Medical Units roaming across the nation to deliver the doorstep medical services to the under served communities.

In order to adhere with the appeal made by Hon’ble Union Minister at the National Forum to mark the 25th Anniversary of ICPD to dedicate a month every year for the social cause of Family Planning and Population Control related activity, HLFPPT is working to impart the same through its various development projects.